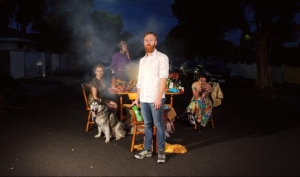 The 2015 FLIGHT: Festival of New Writing is a new and exciting venture between Theatre Works, Footscray Community Arts Centre and the Masters of Writing for Performance course at the Victorian College of the Arts (VCA). Featuring five new works by VCA graduates, the festival promises to be a chance to show off original and dynamic Australian works. One show featuring in the festival is Morgan Rose’s Virgins and Cowboys. Coming off from an incredibly well-received season with MKA Theatre at Melbourne Theatre Company’s NEON season with Lord Willing and the Creek Don’t Rise, Beat had a chat with Rose about her upcoming show and what inspired her to write it.

For Rose, FLIGHT is a beautiful initiative on the part of Theatre Works, Dan Clarke and VCA. “It’s a festival that celebrates new work, experimentation, and allows us to run a little bit wild. We are definitely taking advantage of that. The most exciting thing about it is the diversity of the work. All five playwrights came out of the same Master’s program, and we are all part of the same festival, but the work is incredibly varied. I mean it. See all five, and you will be shocked that we were all taking the same classes, and that we all manage to be great friends and agree on most things when it comes to art.”

When asked what Virgins and Cowboys is about, Rose explains that it is a hard answer to question as it is a weird play. “It doesn’t follow a traditional dramatic structure. It deflates, rather than climaxing. Perhaps some of you will be familiar with this sensation. The play begins as a trite comedy about a guy (Sam) who meets two women online that are both virgins. He and his friends decide that it is Sam’s mission from the universe to sleep with one of them. As the play progresses, Sam’s entire world falls apart along with the form of the play, and we start to see the sad emptiness that lies underneath what we originally thought was a silly sex comedy. Thematically, it’s about the disconnected, lonely lives we lead in the contemporary west (we interact with screens more than we do with faces), and the failing backlash against that (will yoga save your soul?). It’s about the pursuit of happiness, and whether or not that’s a pointless endeavour.”

She then explains that the inspiration for the show originally came from her friend Sam. “He met two women online who were both virgins. He came to me for advice about whether or not to take things further with them. This actually happened. I took it from there and fictionalised it. The real Sam is actually one of my favourite human beings on the planet. The character of Sam in Virgins and Cowboys – although I feel for him, I don’t know if we’d be friends.”

When asked about how she thinks the show will connect to an audience, despite the fact it is yet to open, Rose discusses how she would like the audience to react. “I hope audiences will find it strange and exciting. I hope it will stir up some feelings and thoughts inside them. I hope they can’t quite nail down what those thoughts and feelings are, and it takes them some time to process them. I hope it hits a little too close for home. I hope they recognise pieces of themselves in the characters (because I do). I hope they are a little confused but in an enjoyable way (because I am).”

Up next for Rose is the opportunity to write for the acclaimed Red Stitch Actors Theatre. With the untitled piece in its early stages, Rose is incredibly excited to be working on something she hasn’t tried before. She is also working on a play for teenagers with Riot Stage Youth Theatre. “It’s probably going to be called Easy, Easy and it’s about the way young people learn about sex and sexuality in the age of the internet.”

When asked about how she feels about the independent theatre scene in Australia and whether it offers enough opportunities for writers to share their new works, Rose makes some fascinating points. “I come from the USA, the land of opportunity, where there are actually no opportunities other than the ones you make yourself in your own backyard or the ones funded by conservative millionaires. So to me the independent scene in Melbourne is a wonderland. Even though I’m ridiculously optimistic having come from a place where upstarts and individuals aren’t eligible for funding because they are just too weird (Google the ‘NEA Four’), doesn’t mean that things couldn’t be better in Australia. More opportunities. More! More is more! America is not a role model for a blossoming arts landscape. We shouldn’t pin our hopes on the private sector to fund the arts. That’s just allowing the corporate world yet another area of control. I sound like a revolutionary on a soapbox. I’m way too shy for that. I’ve just seen the other side and it’s boring.”