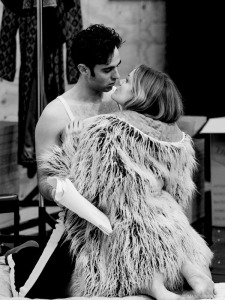 In a world where Kim Kardashian and Kanye West are worshipped and a world where we are obsessed with celebrity breakdowns, Melbourne Theatre Company’s upcoming production of Birdland could not be more well-timed. Written by award-winning British playwright Simon Stephens as an examination of fame, fortune and decadent disregard in a celebrity obsessed world, this Australian premiere introduces us to Paul, a damaged rock star idol whose fame and fortune is at an all time high. Taking on this demanding role is Mark Leonard Winter in what is his MTC debut. When speaking with Winter, he expresses a great passion for this character, no matter how unlikeable he may appear to others.

“Basically the story is about Paul and how the richer he gets and the more famous he becomes, the more he spirals off the face of the world and becomes detached from the real world. It’s about investigating the capitalist system and our emphasis on money and the value of things” explains Winter.

One thing that Winter finds fascinating about the show is what we, as a society, value. He notes that it is interesting to see how success and wealth equate to artistic output, especially when looking at cases like the Kardashians and Kanye West. “I find it fascinating how obsessed we are with celebrity and the notion of celebrity. In the case of Paul, the guy is losing his mind and at one point in the show states that ‘I don’t know who I am anymore. Other people know me and they tell me who I am’. Paul has ceased to exist as a private entity and is now for public consumption.”

For Winter, Birdland is a massive undertaking, especially when playing such a tricky character. “I feel very nervous that a lot of the audience for a lot of the show will potentially really dislike him because he does display his wealth so much and he lets it define him. Certainly it’s a very complex character to relate to and I’m very conscious of people coming along and going ‘Oh you’re a rich rock star who treats people badly – well fuck off then, why would we want to spend time with you?’ But then you realise that there is a lot of that in the world and people want to be around that.” Winter also points out our obsession with seeing people spiraling out of control. “We want to watch car crashes and we want to watch the people with drug and alcohol problems like Miley Cyrus and Lindsay Lohan. We love that they are getting fatter and that they are having affairs and it is really interesting thinking about it in that way. In this respect, the audience is implicated in Paul’s breakdown somehow.”

When it came to researching the role and getting into Paul’s state of mind, Winter turned to The Rolling Stones and Radiohead for inspiration. For Winter, it began with him having a closer look into the lives of the Stones, especially Keith Richards. “Keith was a good touchstone in terms of how he felt like he could get away with anything. It was a good place to start with in terms of exploring the lavishness of their life and how loose they were – it was a way to understand the eccentricities of their lives.” Winter also notes the influence that Thom Yorke of Radiohead has played a part in his character development. “When you look at the endless touring, the endless playing of stadiums and the endless getting asked the same questions by different journalists in different cities, you can see how Yorke could cripple under the pressure of that and why he wouldn’t want to talk about it.” According to Winter, Radiohead is the perfect template of the relationship that Paul shares with his band mate Johnny.

After having been in the industry for a number of years, including productions such as The Effect (Sydney Theatre Company) and M + M (Theatre Works) and the films Balibo and Van Diemen’s Land, one must wonder what has been Winter’s career highlight. For Winter, that is Thyestes (The Hayloft Project), which played as part of both the Melbourne Fringe Festival and the Sydney Festival. “I was quite proud of that because it felt like the culmination of our artistic adolescence in some way. With that piece, we sort of stepped into adulthood and I found it to be the product of many ambitious, possibly failed shows with lots of smacking our heads against the wall, wondering what we were doing with our lives. That piece of theatre shifted things for me and I’m quite proud that people responded to it so strongly.”

For Winter, a highlight of the rehearsal process has been working with the creative team in an open, fun and collaborative environment. As he explains that it has been quite a tricky creative process due to Stephen’s sparse script and lack of stage directions, Winter notes that that the team has really worked as a creative force together to bring the script to life. “Leticia has been great at putting together a team who want to make an immersive, creative and kick-arse experience. The show is really quite a departure in some way for MTC to be tackling material like this. If we, as artists, sit on the fence, we’re fucked and it really needs to be a process of people wanting to take this as far as we can.”

Birdland will run from Saturday June 6 to Saturday July 11 at the Southbank Theatre, The Sumner.